This week, on the anniversary of Gideon v. Wainwright, The Ridenhour Prizes announced that GIDEON’S ARMY, directed and produced by Dawn Porter, will receive the 2014 Documentary Film Prize.

The Ridenhour Prizes recognize and encourage those who persevere in acts of truth-­telling that protect the public interest, promote social justice, or illuminate a more just vision of society.

Gideon v. Wainwright (1963) is the landmark Supreme Court decision that unanimously ruled that states are required to provide counsel in criminal cases to represent defendants unable to afford to pay for their own attorneys. GIDEON’S ARMY follows three young public defenders in the Deep South — Travis Williams, Brandy Alexander, and June Hardwick — as they struggle with staggering caseloads, long hours and low pay, trying to balance their commitment to public service with a criminal justice system strained to the breaking point. Here’s the trailer (:45):

In reflecting upon its decision, the awards committee said, “We are thrilled to have selected Gideon’s Army which celebrates the legion of idealistic young public defenders who are fighting for equal justice for the disenfranchised within our broken and biased legal system, while struggling to stay one step ahead of poverty themselves.” 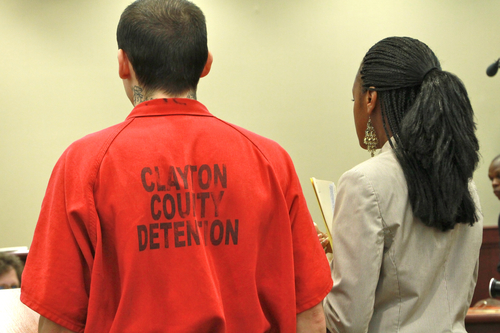 (One of the attorneys featured in the film, Brandy, with a client.
Image source.)

GIDEON’S ARMY highlights the work of public defenders while also exposing the subtle and not so subtle ways in which the justice system is complicit in the mismanagement of indigent defense. Rather than taking their chances with a court appointed lawyer — who may have hundreds of other cases — increasing numbers of defendants agree to plea deals or sentences outside of a trial. As a result, between 90 to 95 percent of defendants plead guilty and never receive the right to counsel as guaranteed by the sixth amendment to the Constitution. This disconnect between the promise of Gideon v. Wainwright and the reality of the law’s implementation has clearly contributed to prison over-crowding, violence, and a reduced chance of rehabilitation.

A study of the 100 most populous counties in the United States found that 82 percent of indigent clients were handled by public defenders. In the most recent year that numbers are available, a mere 964 public defender offices nationwide had to handle nearly 6 million indigent defense cases.

“I am honored and so very grateful to receive the Ridenhour Documentary Film Prize,” said director Dawn Porter. “The award will help amplify the critical issues Gideon’s Army exposes, and further share the harrowing stories of America’s overworked public defenders with audiences across the world. Ron Ridenhour was a man committed to truth-telling and correcting injustice. My hope is to advance these same ideals, by using Gideon’s Army to educate audiences, spark civic debate, and ultimately advance constructive solutions to the problems facing America’s criminal justice system. On behalf of the 15,000 public defenders and their clients, and with special thanks to the wonderful lawyers of Gideon’s Promise who are the inspiration and heart of the film, I thank the Ridenhour Award Committee.”

We here at JustPublics@365, congratulate Dawn Porter on this prestigious award. We’re also pleased to have this opportunity to share our recent interview with her.

GIDEON’S ARMY will be awarded the 2014 Ridenhour Documentary Film Prize on Wednesday, April 30th, from 12pm to 2pm at the National Press Club in Washington, D.C. This event is open to press.