The policing practice known as “stop-and-frisk” is a key feature in the oppression of African American and Latino people in New York City. In particular, the NYPD targets young men of color with practice. These encounters are often the beginning of being “caught up” in the criminal justice system.  It destroys individual lives, families, and entire communities.

Although the legal authority for street stops has existed since 1968 (based on the US Supreme Court decision on Terry v. Ohio) the kind of stop-and-frisk policing we see today really began in New York City in 2002 under the Guiliani administration. The number of stop-and-frisks continued to rise exponentially under Bloomberg’s administration. In 2011, some 685,000 people were stopped and frisked by NYPD, most were black and brown, and 90% were never charged with any crime.  Of the 10% who were charged, most were for small amounts of marijuana. 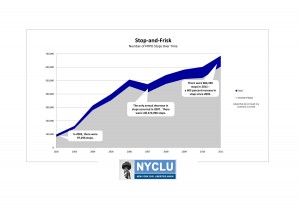 On Monday, academics, activists and journalists met at the JustPublics@365 Summit on
“Resisting Criminalization.”  In one of three concurrent round table discussions, participants were invited to discuss ways to people in different arenas (academia, journalism, activism) might work together to “resist criminalization.”   All the invited round table sessions addressed three questions: 1) what’s the underlying problem? 2) how do we address it? and 3) what can we do when we leave here to create change?

What follows is a brief summary of the round table discussion on stop-and-frisk.

What is the underlying problem with Stop & Frisk? Many participants discussed the idea that over-policing of youth of color was based on essentialized ideas of black and brown youth as inherently criminal. Carla Barrett from CUNY John Jay drew disturbing parallels between the moral panic over ‘super-predator’ youth of 1980’s and today’s stop-and-frisk policies. Chino Harden of the Center for NuLeadership pointed out that this policing strategy does not result in fewer guns on the streets. The seizure rate of guns from these stop-and-frisk encounters is less than one percent by the police department’s own figures. The result, Hardin noted, was an increase in marijuana arrests. These charges act as a marker making future police interaction more perilous for our young people. She relayed a story that in her own police encounter, an unpaid criminal fine resulted in her arrest and incarceration. Annette Dickerson from the Center for Constitutional Rights emphasized that the problem of police mistreatment of minorities did not begin with stop-and-frisk and no court case (referring to Floyd, et al. v. City of New York, et al.) is going to end it. The struggle will be long.

How can we resist Stop & Frisk? Resisting Stop and Frisk comes in many forms. The facilitator of this session, Tara Conley (Media Make Change), is developing an easier to use version of the android app for uploading film of police encounters called TxtConnect. Steven Wasserman of Legal Aid said that he believes that the police view stop-and-frisk as a way to make ‘being on the corner’ uncomfortable for people of color. To which Annette Dickerson concurred, saying that ‘stop-and-frisk is part of somebody’s quality of lifestyle,’ connecting the politics of gentrification to over-policing. Other suggestions for resistance included sharing police encounter experiences over social media and print journalism. Chino Hardin also called for coming up with community-based solutions and not relying on police.  Another strategy she suggested was to build resistance via ‘a hood call’ where people hold police accountable by being visible presence when stops occur.

(See all the Twitter updates from this session here.)

What can we do when we leave here to end Stop & Frisk?  Everyone in the room wanted to not simply “resist,” they want to end it. Strategies for doing so included through alternate civilian patrols that would make minority neighborhoods safe for all (including LGBTQ members and elders). Great hope was placed in the change of mayoral administration as a means to affect change. As the participants agreed, “No one thought two years ago every mayoral candidate would have to have a position on Stop and Frisk. Now they do.” We just need to make sure a candidate whose position is to end it gets elected.

The archived livestreamed video of the event is here. To follow soon, we’ll post a more polished video recording of the panel discussion.