In this topic series on media skills for scholars, we have focused on using digital media to communicate your research and measure your online impact. But what about researching digital media itself?

Digital scholarship has quickly become a major area of study in the social sciences. Studying such an interactive, dynamic and ever-changing field can be challenging, but fortunately for researchers, there is often a record. As with most social science research, digital research usually falls into either the quantitative or qualitative camp. Endless debates have pitted the two approaches against each other but, as with the great peanut butter – chocolate debate, they can go great together!

Ethnographic content analysis is a hybrid methodology that draws from both of these approaches and is very adaptable to the digital field. Ethnographic content analysis, or ECA for short, was developed by media scholar David Altheide in the late 1980s to study television news coverage of the Iran hostage crisis from 1979-1981. He argued that while conventional quantitative-focused content analysis is useful for revealing patterns and big-picture information, it leaves out room for more the nuanced interpretations that qualitative methods elicit. 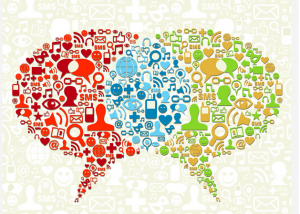 Typically, content analysis is a linear, step-wise projection from data collection to analysis to interpretation, while an ethnographic approach is reflexive and circular. Aiming to meet in the middle, ECA is “systematic and analytic, but not rigid” (Altheide 1987). As with conventional content analysis, information is organized by categories and sub-categories, but with an ethnographic approach, other categories are “allowed and expected to emerge throughout the study.” As any qualitative researcher will tell you, the most interesting findings are often the unexpected ones.

For example, in reviewing TV news coverage, Altheide noticed that while the hostages’ families were a part of the story from the beginning, they became more prominent over time. This had to do, in part, with media access. Families were often willing to be extensively interviewed on camera, and a group of families formed a quasi-organization with articulate spokespeople. Had he not been analyzing data qualitatively as well as quantitatively, he likely would have missed these contextual factors that shaped and influenced TV coverage, or there may not have been a place for this interpretation to “fit” in a conventional content analysis.

The digital field offers so much data, both quantitative and qualitative, and ECA is a highly effective approach for handling both of these. For example, I studied personal blogs written by women with Multiple Sclerosis. Gathering quantitative data, such as the number, frequency and length of posts; images and multimedia; and examining blog architecture demonstrated patterns of activity, topical themes, and design choices, and gave me an overall sense of my sample. I then selected a subset of posts to analyze in more depth, paying closer attention to not just what bloggers wrote about but how they wrote about: Was their blog more information-focused or personal? What was the “tone” of their writing (humorous? serious? what did they complain about?)? Did they write about everyday life or significant events?

Looking at the focus of their blogs revealed that the bloggers saw themselves as having different “roles.” For example, some considered themselves as translators of complex medical information for a general audience. They felt a responsibility to make sure the information was reliable and were diligent about citing sources and providing links. Looking at the tone of their writing (the how), and not just the content (the what) demonstrated that there were different narratives, some that conformed to social expectations about how a personal with serious illness should act (i.e. putting on a sunny face) and some that challenged these expectations and took an activist stance.

I also reexamined and interpreted images and graphics. Some bloggers posted pictures of themselves, their families, and their pets, and provided ways to contact them, while others were not as forthcoming in these ways, indicating varying levels of comfort with a public identity.

The ECA I conducted was the first phase of a three-part mixed method study, which also included a survey and online discussion forum. The information I gathered helped me craft the subsequent survey and discussion questions and guide the rest of the study. The results served as a foundation to which I returned again and again during data analysis. As I found, ECA is a well-rounded and adaptable research method for the digital field, which can be used both on its own and in tandem with other methods.

This post was written by Collette Sosnowy (@SOsnowyNYC). She has a Ph.D. in psychology from the CUNY Graduate Center and is the Project Manger for JustPublics@365. She likes both chocolate AND peanut butter.