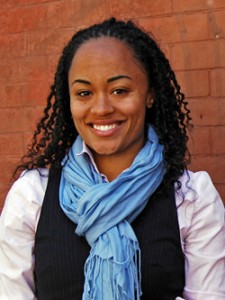 Jamilah King is the news editor at Colorlines.com, coordinating story assignments as news breaks, as well as covering urban politics and youth culture. In this interview we talk about her involvement as one of the leading journalists working on the issues of urban politics and youth culture in New York City and what changes she foresees coming from District Court Judge Shira Scheindlin’s recent ruling on Stop-And-Frisk.

Can you share a little bit about yourself and your involvement as one of the leading journalists working on the issues of urban politics and youth culture in New York City?


I’m a senior editor at Colorlines.com. I have been with Colorlines for quite a few years. We were really moved by the issues of “Stop and Frisk” for a number of reasons but primarily as people of color who live in New York City it’s an issue that deserves attention and that’s why we try to cover it.

Colorlines is a national news site where we aren’t afraid to talk about race. That could mean everything from talking about things that are kind of explicitly about race, issues like “Stop and Frisk” for sure. Pretty policy heavy and exists within this long history of police harassment of men of color specifically. It can also mean talking about music and culture and that’s sort of where I sort of step into the picture and look at issues as they relate to culture. How people move through cities or move through environments and the policies that affect that movement. For instance, today we did a story on the Swedish band Dragon, they’re getting ready to release their new album. Using a lot of South African house music on it. It’s kind of a little bit of everything. But it’s multi-centered on the idea that we’re not afraid to talk about race in an era when a lot of people are really really afraid to talk about race.

Our social justice topic series on stop-and-frisk is focused on envisioning what NYC will look like without stop-and-frisk tactics. In your experience, what changes, if any, do you foresee with District Court Judge Shira Scheindlin’s recent ruling to end this controversial policing experiment? What does this ruling mean to the young men and women of color in NYC?

We did a couple of pieces specifically talking to young men of color and young people of color who were targeted by “Stop and Frisk” all the way back to 2010. We actually talked to the David Floyd who really emphasized this idea of wanting to walk down the street and not feel a sense of fear. That you are a target. In my reporting I’ve talked to a number of psychologists and policy folks who were really trying to bring home the point, the psychological, emotional and physical impact that a policy like “Stop and Frisk” has on someone.

If you are a young man of color who is walking down the street and you do get stopped and you do get cited for whatever reason, I think that it has a profound impact on not only on the way that you see police, but the way that you see yourself. I was talking to a young man who actually last summer who lived in Brownville, Brooklyn.He’s a guy who works at a community center and he had grown up in Brownsville. He really communicated to me just feeling like you’ve done something wrong. Just by being in your skin, your body. You, by walking down the street, is somehow a criminal act.

That is wrong on any number of levels. But it’s especially wrong when you think about it in this context of really policing the bodies of people of color.

I know that a lot of “Stop and Frisk” is very specifically about black and brown men. But it’s also an issue we have seen with queer communities of color. It’s also an issue with women of color. I think the broader issues of surveillance of communities of color is something that you see across these different sections. The AP, Associated Press, did a story, an investigation last year looking into the unwarranted surveillance of Muslim communities of New York State. And now you have all these NSA revelations we’re all seeing that we’re being targeted in some way, shape or form. Even for folks who aren’t directly impacted by a thing like “Stop and Frisk” I think they should be wary of it because it sets a precedent. It sets a precedent for the types of behaviors that law enforcement can engage in. While those behaviors may start with one particular community they often expand to a lot of other people.

I think that “Stop and Frisk” is a really is a model of a very specific policy issue that gained a lot of traction, thanks in part to those different sectors working together and each sharing their expertise. You know? You had groups in New York City who had long been working on issues of police accountability and they were sort of very involved in the organizing elements of this. You have groups like Communities Against Violence, you have also the Malcolm X Project, these groups that have long been doing this type of work. they were very much integral in pushing that policy agenda.

Then you had young people. You had young people, you had young media makers, media makers in general actually capturing what was happening. That actually gave voices and stories and faces and names to the issues that many people felt very detached from. Then of course you had the academic aspect of it which gave a lot of context, historical context that was going on. I think especially in my work as a journalist it was really important to get the perspective of academics who not only work in policy, but as I mentioned before who are psychologists and can actually talk about this as a public health issue and not just one of quote-unquote political correctness.

I think that by having a bunch of different people at the table owning their expertise, giving and allowing each other the room and the space to own that issue from their perspective. “You are great with a camera go out and make a short video,” if you are great at sort of getting into the meat of things. If you’re a great organizer and can bring a hundred or two hundred people together, then do that. I think you really, really saw a lot of that traction and positive energy around this issue.

What people and resources (both print and social media) should individuals follow to stay on top of news related to stop-and-frisk?

Colorlines.com is a good resource that I’d encourage everyone to read. Also organizations that have been working on this issue. I mentioned Malcolm X Project does a lot around policy. The Nation magazine published, about a year ago, one of the first videos that captured the interaction between a young man of color, and a police officer, who was being stopped and frisked. Those are the sort of outlets that I think that folks can go to if they want to stay plugged in. I’d also say that this is an issue that’s built around personal narrative. I think talking to people in your community about issues of police harassment or even talking to police officers themselves, ones who are safe to talk to and are willing to engage around what does safe and accountable police look like. Those are the conversations that can be had in a number of communities, not just New York.