Numerous volunteer groups joined in the recovery efforts following the deadly gas explosion in East Harlem, and while the community’s most important needs were met, there was some confusion and disruptions in communication in the aftermath. This was part of what inspired the CUNY School of Public Health and several co-sponsors to organize a community conversation on April 26 to reassess community response efforts and discuss ways to improve emergency preparedness. 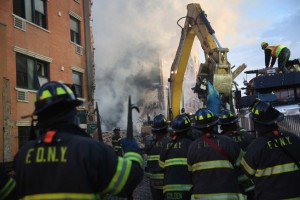 Several local members of the Office of Emergency Management’s volunteer Certified Emergency Response Team (CERT) were there. CERT members are trained to assist with fire safety, medical aid, and search and rescue, among other support tasks. Most of the time, they serve as community educators about emergency preparedness. The explosion in East Harlem was the first time some of them had dealt with a major emergency. They encountered challenges with knowing their role and communicating with other organizations, and a consensus from the community conversation was the need for clear, reliable communication channels so that all responders know where to go for information.

East Harlem resident and CERT member Sam Goudif shared his experience following the explosion, and highlighted how a lack of clear communication made things more difficult, but also demonstrated the desire to help that is the motivation for these volunteers.

My name is Sam Goudif, I’m a CERT member for the last two years. And during the disaster with the gas explosion, I was in Harlem. I was at home watching the news. Naturally, that was the main focus of the news and I knew right away that I would be mobilized. I got the call from the chief and was mobilized to go to 118th Street. Trafficking and crowd control were the main components of what we did. It was about 3 or 4 blocks away from the incident. We wore our masks, which were inadequate, but we had something. We had to double up on them, as a matter of fact. It was interesting that people responded quite well with us. We didn’t have the issues of struggling or fighting with anyone. As a matter of fact, people were helping out in a number of ways. It wasn’t an issue with the crowd. The issue came about as the chain of command. What we were supposed to do in terms of where we were located. Who comes and goes, who was allowed and wasn’t allowed. I was in the first responders. They were very visible, very active. We all tried to coordinate the best we could, the best we had. It was a very challenging moment for us, and a learning process for us. This is the biggest incident I’ve ever gotten involved in.

We had a discussion, we went over a lot of things [referring to the community conversation]. The main thing we discussed was equipment and being safe. That’s the number one issue.

If you aren’t safe, you can’t make anybody else safe. If you don’t have communication you’re really left out there in the field.

So you need better communication than we did. Where were able to communicate, we were able to go over things, was at Hunter College, Zero One ground for us…to have community come together and actually support whatever needs were needed at the time, in terms of people coming in asking questions: where to go, where to get help. Facilitate them in the best way we knew how. And we did that. And that’s something else we learned about. Red Cross, we coordinated with them. With the other organizations we had to find a place where we can do the best job we can do.