C. Wright Mills once wrote about being at a party of sociology grad students at Columbia who were working on the PhDs. “After they’d introduced themselves, I’d ask: What are you working on?” It would always be something like ‘The Impact of Work-Play Relationships among Lower Income Families on the South Side of the Block on 112th St between Amsterdam and Broadway.’ And then I would ask: Why?” 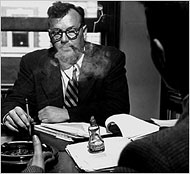 (Image of Mills from here)

Mills called the tendency to conceive of one’s work in narrow terms “abstracted empiricism.” In contrast, he believed that the task of sociology should be to encourage public discussion of things that really matter. He called for a bigger, bolder sociology, one that would take on the big issues of the day, in a fashion that was engaging, and that would help people living in an increasingly complex world to make sense of their lives.

I remember that when I first encountered Mills as an undergraduate, he had an enormous impact upon me. I was captivated by his idea of a “sociological imagination” that would allow individuals to see the connection between personal troubles and public issues, biography and history.

But is it possible to channel Mills’ spirit to reimagine sociology, and sociological writing, today?

As sociologists we write to convey ideas, change the way people think, and influence public opinion. We also write to assert our scholarly authority and to advance our careers. But there’s a tension between these two sets of goals. We advance our careers by publishing in peer-reviewed journals, and by speaking to others like ourselves–not by influencing the broader public.

But these goals were not always at odds with one another. In 1895, in the first issue of the American Journal of Sociology, founding editor Albion Small described the goal of the journal as follows:

[This journal will] attempt to translate sociology into the language of  ordinary life . . . It is not . .. essential to the scientific or even the technical character of thought that it be made up of abstractly formulated principles.  On the contrary, the aim of science should be to show the meaning of familiar things, not to construct … a kingdom for itself in which, if familiar things are admitted, they are obscured under an impenetrable disguise of artificial expression.

Writing in sociology journals, at least through the 1940s and 1950s, was essayistic, dialogical, and marked by the author’s presence. But over the next few decades, it came to resemble natural science journals—with growing attention paid to literature reviews, charts, and tables, and methodologically driven articles–what Ben Agger calls “secret writing.” Professionalization went hand in hand with an emphasis upon quantitative analysis of empirical “facts” and an aspiration to a natural science model; sociological writing came to emulate the scientific journal article.

Mills feared these trends. The use of specialized language, addressing concerns that are mainly disciplinary in origin—the “private” as opposed to the “public” intellectual would, he believed, lead to intellectual introversion. Rather than valuing small incremental increases in knowledge, we should do “big picture” research, he believed. He saw sociology as an activist project and believed that a sociological imagination could “counter the drift toward conformity, homogenization, and instrumental rationality.” Critical, publicly engaged sociologists, he believed, could lead the way to a better society.

Today the field of sociology is larger and more decentralized than it was even in Mills’ day. Hierarchies of prestige are reflected in the rankings of academic journals and graduate departments. When competition for employment and promotion is fierce, greater rewards accrue to those who adopt professional identities that conform closely to hegemonic understandings of the discipline. Since academic advancement is securely mainly through publishing and communicating with other experts, professional intellectuals have little incentive to translate their work to broader publics. When professional gatekeepers pronounce upon the student who is and isn’t doing important work, and indeed, who is and isn’t doing “sociology,” students and faculty internalize these standards and receive rewards for adhering to them.

Over the past decade, those who are looking for an alternative have gravitated toward what some call “public sociology.” Public sociology is not a specialty, a set of theories, or a methodology: it is a way of thinking about one’s work that shifts conceptions of audience, and values the importance of clear communication.

I’ve written about some of these issues. See, for example, “Discipline and Publish: Public Sociology in an Age of Professionalization,” in Bureaucratic culture and escalating world problems: Advancing the Sociological imagination, edited by Knottnerus JD, Phillips B (2009): 156-71.

I’m also co-authoring a primer for those wishing to do public sociology, and in periodic posts I’ll share some of this work in progress.

~ Arlene Stein is Professor of Sociology, Rutgers University, and co-editor of Contexts, a quarterly magazine of the American Sociological Association. This post is a re-blog from here.