Today, our stop-and-frisk series continues with an email interview I did with two researchers involved in the Morris Justice Project (MJP), a community-based, participatory research and action project in the Bronx. 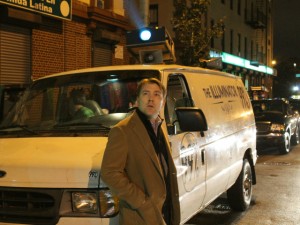 is an Assistant Professor in the Psychology Department with a Joint Appointment in the Gender Studies Program at John Jay College of Criminal Justice. He has worked on numerous participatory research projects nationally and internationally. He has recently served as the Research Director for Polling for Justice: a large NYC based participatory action research project to explore, with youth and adults, the experiences of young people across criminal justice, education, and public health. His work has been published in volumes such as Class Privilege & Education Advantage and journals such as The Urban Review; Children, Youth & Environments; and Men and Masculinities.

Maria Elena Torre (PhD, Graduate Center-CUNY) is the founding Director of The Public Science Project at The Graduate Center of the City University of New York. For more than 10 year

s she has conducted participatory action research nationally and internationally with schools, prisons, and community-based organizations. Her work has introduced the concept of ‘participatory contact zones’ to collaborative research, asking how we might build a radically inclusive ‘we’– from which to build knowledge, relationships, and policy that interrupt social injustice? She is a co-author of Echoes of Brown: Youth Documenting and Performing the Legacy of Brown v. Board of Education and Changing Minds: The Impact of College on a Maximum Security Prison.

Jessie: Can you share a little bit about the Morris Justice Project and how you came to be involved in the issue of stop-and-frisk in New York City?

Brett and Maria: The Morris Justice Project was designed to document the experiences and attitudes of residents living in a heavily policed New York City neighborhood. Since 2011, we have collaborated with residents of the Morris Avenue area of the South Bronx, a neighborhood in the 44th police precinct that had the highest percentage of police stops leading to physical force in New York City. We joined together as a research team after each of us had grown deeply concerned about the impact of the city’s increasing use of aggressive and discriminatory policing. Mothers (who eventually became our co-researchers) had taken to filming police interactions with their sons, using their cell phones to document regular harassment in their private courtyard. We were interested in partnering with them after our own city-wide study (Polling for Justice, Stoudt, Fine & Fox, 2012) revealed disturbing interactions between youth and police.  Our mutual concern led us to meet others in the neighborhood and after an open community meeting at the local Melrose library, we formed a diverse community research team of elders, mothers, fathers, youth, students, community organizers, university faculty and attorneys. Together, as co-researchers, we developed all of the research questions, methods, analyses, and products collaboratively.

Using a participatory action research (PAR) framework, we deliberately engaged the expertise in the neighborhood – the experiences and understandings of those living the consequences of years of policies like stop-and-frisk. Our team decided on a multi-method design that would be able to speak to the NYPD as well as to neighbors in the South Bronx and those who have never been stopped. Over multiple sessions and rich discussion in the library, we built our capacity as a research team through exchanging knowledge about research methods, everyday experiences of stop and frisk, and about city data on policing. We then developed a survey interview and questions with the intent of gathering a representative portrait of neighborhood experiences with and attitudes towards police, as well as close looks at those of particular populations (e.g., mothers, elders, young African American men, etc.). Armed with pens and clipboards, the research team walked the 42 blocks of our neighborhood and systematically distributed the survey in person, block by block. Surveys were also distributed with the help of local businesses, churches, the library, and social networks. Over 1,000 surveys were collected. Additionally, the research team conducted focus groups and individual interviews.

The research team analyzed the quantitative and qualitative data collaboratively using methods such as stats-in-action that allows everyone to participate in analysis at the same time. The findings were used towards a broad set of local and citywide police reform activities intended to raise awareness as well as support ongoing legal and legislative work. This included producing a report that can be easily be carried in a back-pocket, posters, buttons, and t-shirts to communicate the experiences and impact of aggressive policing; co-sponsoring events with community and legal organizations such as the Bronx Defenders and CopWatch to address neighborhood safety; and producing an active social media campaign in solidarity with court cases, legislation, and community organizing related to police reform. Throughout the research process, the lawyers on the research team provided education and legal services for individuals living in the neighborhood.

In addition to documenting experiences and impact of aggressive policing, we developed the ‘community safety wall’ a growing mobile museum of residents’ understandings of what makes their neighborhood feel safe. These ideas will be further developed in community safety workshops this winter that will be designed to offer advocates and policymakers concrete alternatives beyond policing for creating safe communities. You can learn more about the project, the findings, and products at http://morrisjustice.org.

Jessie:  What changes do you foresee with District Court Judge Shira Scheindlin’s recent ruling on this controversial policing practice?

Brett and Maria: The Floyd and Ligon class action lawsuits against the NYPD as well as the passing of the Community Safety Act (Intro 1080 and 1079) mark important strides to end discriminatory policing practices in NYC. However, the recent U.S. 2nd Circuit Court of Appeals decision has made the future of police reform temporarily uncertain. The next mayor will play a significant role in whether future appeals are pursued and how and what changes eventually occur within the NYPD.

Jessie: Some academics might be hesitant to get involved in such a controversial political issue.  What do you say to critics who might question your ‘objectivity’ as a scholar?

Brett and Maria: First, whether considered ‘controversial’ in the public or not, there is no credible academic research thus far that has been able to demonstrate a substantial relationship between the decline in crime in NYC and the increasing use of stop-and-frisk by the NYPD.

There are however, many studies, and now several lawsuits, that have demonstrated that stop- -and-frisk has too frequently been racially biased, unconstitutionally practiced, and ineffective at uncovering weapons or other crimes.

At the same time, there is increasing evidence that it deteriorates community-police relationships and has a whole set of unintended consequences, in particular for communities of color, poor communities, and among LGTBQ and gender-nonconforming people (whether stopped by police or not). For more details about the ways stop-and-frisk harms community-police relationships see http://morrisjustice.org/report and http://www.vera.org/project/stop-question-and-frisk-study). Communities like the South Bronx deserve effective policing that is fair and just.

Second, we are participatory action researchers (PAR). PAR argues that the distinction between ‘academic’ and ‘activist’ is a false dichotomy. There is a long history of scholar-activists like Kurt Lewin, W.E.B Du Bois, Ignacio Martín-Baró, Paulo Freire to name a few. Scholar-activists are committed to producing strong scholarship, grounded in carefully produced and analyzed data, that is in turn useful beyond the academy – for the general public, for activists, advocates, lawyers, and policymakers. While all of our work produces academic papers and presentations we equally value other more popular or ‘public’ ways of using our research to interrupt injustice. PAR does not subscribe to the notion that social science is ever value-free. In fact, we believe that research that strives for, or claims, objectivity, is vulnerable to reproducing values that reflect or benefit those in power or who hold privilege.

Instead, PAR asks that researchers to examine the ways knowledge is historically situated and produced, and to reflect carefully on how our lives (e.g. our experiences, values, biases, and assumptions) may determine what we ask, what we see, how we analyze, and what we say.  In practice, as PAR researchers, we think and talk about our values and assumptions as part of the research process and we build diverse research teams as contact zones (almost as a validity check) with multiple standpoints, experiences, skills and expertise. We furthermore seek opportunities outside our research team to hold our instruments, data, and interpretations accountable (e.g. community-based advisory groups). And in our analyses, we intentionally seek counter-stories, outliers, and pieces of data that do not match our assumptions and overall conclusions.

Brett and Maria: The participatory community-rooted design used by the Morris Justice Project allowed researchers (in the academy and the community) to simultaneously speak to local and citywide concerns about policing. The project was intentionally designed to deeply engage a small, highly impacted section of NYC in order that both research and action could go beyond a city sweep and remain local in its focus and attention. Our research findings and products made their way into the city-wide campaign for police-reform, and at times into the hands of lawmakers, but each instance was grounded in the community from which the data was produced.

As an example of research that braids research and action through scholarly and democratic practice, the Morris Justice Project is useful. The research team held two simultaneous commitments in solidarity with the citywide police reform movement: finding strategies to be in conversation about policing with residents in the neighborhood as well as findings strategies to amplify the experiences and concerns within this one neighborhood throughout the city. This research-action design allowed for the collection and analysis of large amounts of information (data) and then the direct delivery of that information back in a reasonably comprehensive way to those who produced it, through education, local activism, legal support, and relationship-building with local residents and community organizations. At the same time, the design allowed for the collection of information that had relevance beyond the local and the development of genuine social, professional, and political relationships that extended beyond the project. As a result, the Morris Justice Project, through its research, was able to establish strong and reciprocal connections with a host of citywide activities including grassroots activism, legislation, and lawsuits.