Guns, the most lethal means of committing suicide, represent a public health crisis.

Most imagery conjured up by the idea of gun violence in the national debate involves on one end, a bad person with a gun, and on the other end, another person scared senseless by the bad person with the gun, waiting for the cavalry.

But the numbers paint a different picture – one that continues to prove difficult to digest for folks on both side of the debate .  In fact, suicide is the leading type of firearm death, and teenagers, young adults, and males aged 75 and older are currently at the highest risk for this type of death. According to the CDC, suicide is now the third-leading cause of death for teenagers.

Of the 100 people who take their own lives every day in America  – that’s almost – 40,000 deaths a year –  most use a firearm.  More people choose a firearm over all other intentional means combined, including hanging, poisoning or overdose, jumping, or cutting. But Americans are not more suicidal than the citizens of other comparable countries (populous, wealthy). They just have more access to the most lethal means of committing suicide. A gunshot is an irreversible response to what is often a passing crisis – possibly worsened by the temporary depressive fog of alcohol. Suicidal individuals who take pills or inhale car exhaust or use razors have time to reconsider their actions or summon help, but gunshots are merciless game-changers. 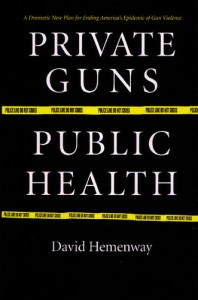 According to the Harvard Injury Control Research Center, the states with the three highest suicide rates (Wyoming, Montana and Alaska) are also the top gun-owning states, and researchers agree that bringing a gun into the home not only increases the risk of gun-related accidents, but also the risk of suicide. Specifically, that research finds:

“Gun owners and their families are much more likely to kill themselves than are non-gun-owners. A 2008 study by Miller and David Hemenway, HICRC director and author of the book Private Guns, Public Health, found that rates of firearm suicides in states with the highest rates of gun ownership are 3.7 times higher for men and 7.9 times higher for women, compared with states with the lowest gun ownership—though the rates of non-firearm suicides are about the same. A gun in the home raises the suicide risk for everyone: gun owner, spouse and children alike.”

It is perhaps time, then, to abandon the myopic view that those who would take their own life are not influenced by the availability of suicide methods, and accept that whether or not they survive is dictated primarily by how they choose to go about it. About 85 percent of suicide attempts with a firearm end in death (drug overdose, the most widely used method in suicide attempts, is fatal in less than 3 percent of cases.)

Research on suicide by the Harvard Youth Violence Prevention Center has also shown that one of the biggest myths is that suicides are typically the result of careful advance planning. While this may be the case — individuals who attempt suicide often succumb to a complex series of problems — empirical evidence suggests that they act impulsively in a moment of heightened vulnerability.

While the recent enactment of the Mental Health Parity Rule (which will guarantee that most insurance coverage offers access to mental health services on par with physical health coverage) brings hope to many whose lives would be vastly improved by access to mental health services, the collection and study of gun-related data has been severely undermined in the past two decades, and with it a crucial means of pushing forward sensible gun policies.

Despite President Obama’s reversal earlier this year of the NRA-sponsored amendment that barred the CDC from studying the causes and prevention of gun violence, researchers are still unable to answer many key questions such as the number and distribution of weapons across the country – slowing down prospects for life-saving policy reform. So much grief could be softened, if not avoided, by addressing the public health crisis of guns and suicide.

~ This guest blog post was written by Alice Cini is a social justice advocate and Social Work Fellow at the John Jay College of Criminal Justice’s From Punishment to Public Health Initiative. You can follow her on Twitter @CinikAl.