Scholarship that’s intended for a small audience of other specialists within the academy and with no connection to the larger social world may continue to have a place, but there are indications that the ivory-tower-only-scholarship no longer holds as much appeal.

Part of that change has to do with digital technologies.

The ‘architecture of participation’ in the digital era has opened up the possibility of being a public intellectual to a much wider range of both traditional academics and non-academics alike.   Being a public intellectual today relies in a fundamental way on the idea of open knowledge production, an idea that encompasses open software, open access journals,  and open data.

While the “public intellectual” is sometimes thought of as simply a provocateur or dismissed as celebrities gifted at self-promotion, the reality is that when there are pressing social issues it becomes necessary for scholars to connect their work to activism that is trying to address those issues.  Being a scholar-activist doesn’t mean eschewing academic rigor, but rather using academic tools in the service of the public good.

A couple of stories of scholar-activists may help illustrate this point.

One of my first assignments as a graduate student Teaching Assistant (TA) at the University of Texas-Austin in the late 1980s, was to work with Les Kurtz on what was colloquially known as “The Nukes Class,” about the sociology of the nuclear arms race.  Les is world renowned scholar of sociological theory, religion and non-violence.  I learned a lot from him about what it means to be a scholar-activist. Les’ class lectures featured sharp sociological analysis on the dangerous build up of nuclear arms and how the rhetoric about an “arms race” contributed that danger.  In an especially entertaining turn, Les invited two representatives from FEMA to offer their by-the-book instructions for what to do in the event of a nuclear bomb attack (note: bring your credit cards, as cash may no longer be accepted after a nuclear holocaust). His book,  The Nuclear Cage: A Sociology of the Arms Race,  offers a reasoned, scholarly analysis of the issue that is also a devastating critique of this particular form of collective madness.

A more recent example involves the scholar-activism happening around the current crisis in Detroit.

The Antipode Foundation, a community of radical geographers, recently awarded a Scholar-Activist Project Award to  Uniting Detroiters: Coming Together from the Ground Up.  The awards are intended to support collaborations between academics, non-academics and activists in ways that promote the public good. 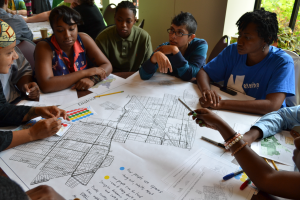 The Uniting Detroiters  project has brought residents, activists, and scholars together to examine critical problems facing Detroit and develop tools for collective analysis, reflection, and co-research. Over the past year, they have:

Efforts such as Uniting Detroiters  that brings together scholars and activists can be part of work that brings about real change that improves the lives of all people, including those who are often excluded from decision-making in society.

Over the next month here our topic series will explores the pressing social issue of stop-and-frisk, we’ll look at ways that scholar-activist partnerships are making a difference.