In the spring term of 2013, CUNY sociology Professors Juan Battle and Bill Kornblum offered a unique course called CUNY As a Lab, in which MA and PhD students at the Graduate Center conducted research about CUNY itself. Together, the class documented the wide variation in student experience across the wide array of CUNY institutions. JustPublics@365 helped CUNY As a Lab students collect, store, share, and analyze visual data using the online digital photo storing and sharing site Flickr. While there are many ways to collect and store visual data, I want to highlight some of the tools that made Flickr especially useful for research and teaching.

In small groups, CUNY As a Lab students used multiple research methods to profile each of the 23 CUNY colleges. They profiled campuses using history, ethnography, demographic analysis, interviews, and observations about campus space. As students conducted research on their respective campuses they uploaded pictures to a Flickr account shared by everyone in the class. Photos from each campus were grouped into “sets”. In order to preserve confidentiality of research participants, the Flickr account was kept private so only students in the class could see it.

Visual data is different from “data visualization” which usually involves representing abstracted quantitative data in creative ways. The visual data collected by CUNY As a Lab students was digital photographs which students analyzed for clues about life on any given CUNY campus. Because the Flickr account was shared, students could also analyze each other’s photos during the research process for insight into what their peers thought was important to document. This helped students to generate ideas about what they wanted to capture in their photos.

Flickr is a great place to store photos if only because it is free, open, and easy to use. It allows users to choose from a range of licenses for each of their photos, including a license which allows people to contribute to a commons of photos with “no known restrictions” which can be used and shared by anyone. Often people don’t know that the photos they find using a Google image search can’t necessarily be used and shared freely due to copyright restrictions.  Flickr offers many open access photos, and makes it clear which ones are free to use and which aren’t.

Beyond being a great place to store photos, Flickr offers a number functions which make it a potentially rich tool for pedagogy and research practice. For the purposes of CUNY As a Lab we focused on annotating, tagging, mapping, and sorting photos into sets. As students uploaded photos to their campus sets, they came up with tags which conveyed themes that were represented in their photos.

Tagging is kind of the equivalent of coding.  That is, the process by which social researchers identify and keep track of themes in their qualitative data shares much in common with “tagging” in social media. After students had tagged (or, coded) their photos they could click on any given tag and a Flickr-generated group of photos with the same tag from all campus sets was produced. This allowed students to compare themes like “common area,” “leisure,” “activities,” and “security” across campuses. The following Flickr-generated tag cloud indicates the range of tags students came up with: 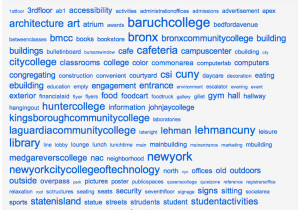 Another feature offered by Flickr is the opportunity to annotate photos. If tagging photos is like coding, annotating is like taking field notes. Some students made notes on particular sectioned-off parts of their photos to draw attention to what they thought was important about the photo. Flickr allows notes to be tagged by theme and linked together. We didn’t take full advantage of that in CUNY As a Lab, but here’s a link to a great idea for an exercise that does.

One of the most visually compelling outcomes of the use of Flickr in CUNY As a Lab was the  Flickr-generated map of New York City with CUNY campus locations tagged. Here’s a frame which encompasses all the locations tagged in photos of CUNY City College: 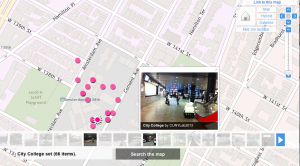 Most students who responded to my survey of the class reported that they hadn’t collected visual data for research purposes before their CUNY As a Lab research, and all agreed that the collection and coding of visual data enhanced their projects. One student commented that:

[Using Flickr] “gave me an additional frame of reference when thinking back and analyzing my data.”

Most responded that they had spent time looking at each others’ photos during the research process and that the open, collaborative nature of the Flickr account enhanced their own research. The process wasn’t perfect.  A number of students commented that there could have been more parameters set for the collection of photos. One great suggestion that emerged from the class survey was that the instructor could specify a set of tags or themes beforehand that students would then go out and look for. As one student commented, this could make for a more cohesive research and photo-browsing experience.

Students used photos in their final presentations about each campus. The following slides are from CUNY As a Lab students Rachael Benavidez and Amy Blair’s final presentation about CUNY Community Colleges in Queens. Many students chose to document the outdoor spaces of their respective campuses, which made for really interesting comparisons of the range of physical environments on CUNY campuses: 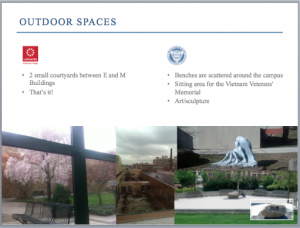 In the slide below, the same students captured a theme that was reiterated in their interview data, that access to advisement is slow and difficult at both LaGuardia and Queensborough Community Colleges: 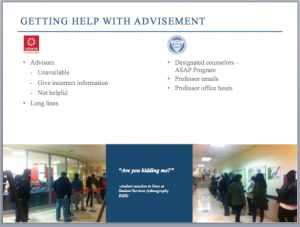 While we know that photos enhance our ability to communicate ideas, the use of Flickr in CUNY As a Lab suggests that the process of collecting, coding, and organizing photos can also be useful before the presentation stage. Organizing visual data can be an opportunity for a class to collaboratively clarify and organize their ideas, and learn from each other’s work in the process.

If you’re interested in this technique and would like to learn how to take better photos with your mobile device, you might consider taking one of these workshops designed to help you do that: Smart Photos with Smartphones.