Lessons from the Birth of the “Stop and Frisk Watch” App

I recently reached out to the New York Branch of the American Civil Liberties Union (NYCLU) in order to find out more about their new “Stop and Frisk Watch” app for IPhones (available in English and Spanish) and Androids (only in Spanish).   This app appeared to be a perfect unison of grassroots activism and digital technology in addition to being a good example of how digital technologies can alleviate a social injustice.  As I later found out from the NYCLU Communications Director, Jennifer Carnig, the way that this app came to fruition also provides important lessons for academics trying to incorporate digital technology into their research and/or activism.

Stop and frisk raises grave concerns over racial profiling, illegal stops, and privacy rights.  You only need to take a closer look at the NYPD’s own facts and figures to notice a troubling pattern.  Looking at NYPD data reveals that among the thousands of law abiding citizens that are stopped every year, the majority of them are black and Latino.  Last year alone – of the 533,042 New Yorkers that were stopped:

“The Stop and Frisk App”

With this persistent and growing concern, NYCLU seized the opportunity to partner with a Brooklyn-based visual artist and software developer, Jason Van Anden.  Van Anden was the developer who had previously created the Occupy Wall Street app, “I’m Getting Arrested.”  Together the NYCLU and Van Anden set to create an app that would provide New Yorkers with the tools needed to monitor, report police activity, and hold the NYPD accountable for unlawful stop-and-frisk encounters and other police misconduct.

(1)   Film an incident with audio which after being submitted would go to the NYCLU for review.

(2)   Receive alerts of when people in their area are being stopped by the police.  This is an important feature for community groups who monitor police activity.

(3)   Report a police interaction they saw or experienced, even if they didn’t film it. 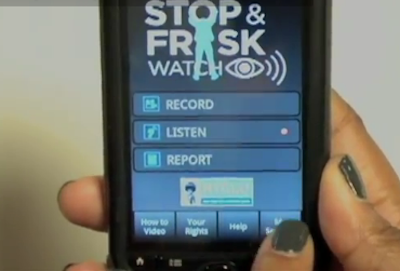 The New York Civil Liberties Union developed this app as a result of what they dub, “intersection between crisis and opportunity”. During the height of Occupy Wall Street, the NYCLU kept getting press calls about an app called I’m Getting Arrested, which allowed Occupy Wall Street protesters to send a text message to select people to alert them that they were getting arrested.  The NYCLU loved the app and immediately thought about all of the ways that same technology might be useful to deal with the issue of unlawful stop-and-frisk practices among young black and Latino men in New York City.  They reached out to Van Anden to discuss possible collaborations and he was immediately sold on the possibilities of bringing technology to social justice.

2) If the data presents a disturbing trend – don’t just report the trend.  Also, consider and propose ways that free and easy to use digital tools can empower your population of interest to take matters onto their own hands!

The NYCLU noticed a disturbing trend since 2011.  During this time, they saw that police street interrogations were skyrocketing. Over the course of the Bloomberg administration, stop-and-frisks had gone up more than 600% – from 97,000 in 2002 to nearly 700,000 in 2011!  Concurrently, 9 out of 10 people stopped are eventually found innocent, and as noted earlier more than 85% of people stopped are black or Latino.  The NYCLU thought it would be empowering for New Yorkers to have a free, easy way to fight back, using the one tool that most people have in their pockets all the time – a smartphone.  Stats show that two-thirds of young adults own smartphones. This technology clearly has the power to help change the way we look at and understand the world around us.

In putting this app together the NYCLU relied on their network, Communities United for Police Reform, of which they are part of the steering committee.  This allowed them to get much needed feedback and support from other member organizations who were either formally or informally involved with developing, testing or sharing information about Stop and Frisk Watch. They also noted that Justice Committee and its Cop Watch groups have been particularly helpful in testing and their members are using the app themselves as they observe the police.  At the same time, they partnered with NYC immigrant social justice group, Make the Road by Walking, who translated their app into Spanish.

4)  Although the digital divide is alive and very much real, make sure to understand the technology trend among your target population

In choosing to develop an app, the NYCLU was well aware that 2/3 of young adults own smartphones; by 2013, 3 out of 4 Americans who acquire a new mobile phone will choose a smartphone; and 72% of smartphone owners will be between 24 and 35. This age range is the perfect demographic for the NYCLU to reach as it is this same group that is being targeted by the police and as such the most likely to use the app.  They also designed the app so that it would be extremely easy to use and hope that its usability will turn passive observers or other disenfranchised by this disturbing trend to become empowered community-problem solvers.