“I’ve been stopped a thousand times” – Black male survey respondent during the research conducted for Coming of Age with Stop and Frisk.

How do you measure the effects of stop-and-frisk on NYC youth, such as the survey respondent above, who report having being stopped more often than they could count or remember?

This was a pivotal challenge faced by researchers, Jennifer Fratello (Research Director, Vera Center on Youth Justice) and Andrés Rengifo (Associate Professor, Rutgers University) for their report Coming of Age with Stop and Frisk: Experiences, Self-Perceptions, and Public Safety Implications which attempts to capture the effects of stop-and-frisk.  During a recent event organized by The Center on Race, Crime and Justice at John Jay College-CUNY on October 17th, Fratello and Rengifo discussed their research. 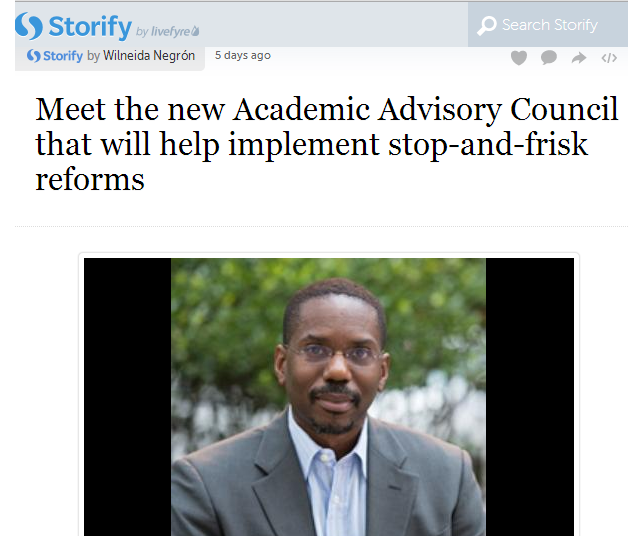 Now that the NYPD’s stop-and-frisk practice was rejected by U.S. District Judge Scheindlin, the debate has shifted from discussions regarding its effectiveness in reducing crime to the effect it has on the lives of those stopped (in many cases more than once). As activists seek deeper reforms in policing, public scholarship is once again called upon to inform this debate.

While conducting research, Fratello and Rengifo quickly found out that in order to capture the broader effects of stop-and-frisk, they would have to learn to ask better questions and work with key government and community groups. The latter is particularly important, as they soon realized, none of the stakeholders (e.g., schools, police, public agencies, churches) were talking to each other.  During the October 17th meeting, panel speaker, Dr. C. Jama Adams discussed the importance of having greater institutional channels for communication among these stakeholders.  He mentioned that stop-and-frisk should be addressed holistically through a community-approach.  He feels this is the only way to address the deeply-rooted culture of “fearfulness” of which he finds Black males are often the scapegoat and which he feels stifles the individual creativity and spontaneity of all community members.

Fratello and Rengifo faced challenges in capturing the instances of stop-and-frisk events in a respondents’ life.  In some instances, the sheer scale of the policing practice proved to be a problem. In piloting the survey, the researchers discovered that they would have to modify their questions to account for multiple stops. For those people who were stopped more than once, they either asked them to talk about the last time they were stopped or their most memorable stop. Yet, even when conducting research in neighborhoods with high rates of stop-and-frisk occurrences, the researchers were not able to meet their data collection goals for two neighborhoods – Jackson Heights and South Bronx – even after adjusting their research questions and approach.  In both of these areas they found that in general, people seemed reluctant to speak with outsiders about the police.  However, in Jackson Heights they faced the additional challenge that the majority of residents (65%) are foreign-born and may have an added apprehension of talking with “outsiders” (Coming of Age with Stop and Frisk: 11).

In other words, the very nature of stop-and-frisk makes it hard to measure its effects.  The reason for this is that those most victimized have a general apprehension over being approached by strangers, especially to discuss involvement with the police.

Despite these challenges, Fratello and Rengifo were able to uncover some of the corrosive effects of stop-and-frisk policing, especially on young people. They found that among the young people most stopped (between the ages of 13 and 25), trust in law enforcement is disturbingly low.

These findings present several troubling public safety implications.  For one, this population is most at risk of future victimization, therefore, its worrisome to consider they may feel like they have no where to turn if victimized. Secondly, they are also the ones for whom law enforcement needs to connect with in order to solve crimes and significantly improve safety in these neighborhoods.

Previous studies have found a similar level of distrust of law enforcement among urban youth of color.  In a series of qualitative interviews with urban youth in the United States, Canada, and Australia, Ruck and colleagues document that these young people were not only concerned about abusive treatment by police but were also resigned to it because they saw it as “inevitable and unlikely to change” (Ruck et al., 2008:20, “Youth experiences of surveillance“. In M. Flynn & D.C. Brotherton).  However, other studies have shown that distrust of law enforcement can be spread through social networks and does not necessarily require direct contact with the criminal justice system (Menjívar & Bejarano, 2004, “Latino immigrants’ perceptions of crime and police authorities in the United States: A case study from the Phoenix Metropolitan area“). Clearly, this highlights the need for more research to discern between other factors which could give rise to distrust of law enforcement.

Fratello and Rengifo include a set of timely recommendations in the Vera Institute report aimed at restoring trust and improving police-community relations. Most relevant for academics is their recommendation for the NYPD to partner with researchers to better understand the costs and benefits of various proactive policing strategies meant to replace stop-and-frisk.

Although academic-police partnerships are not new and reflect a growing trend toward “evidence-based” practice, it is not a relationship which comes easily for either police or researchers. In the article, “Partnerships with University-Based Researchers,” in a 2009 edition of The Police Chief Magazine, Sanders notes that although partnerships between law enforcement leaders and academic researchers have achieved much success and demonstrate long-term benefits for both, “only a small number of law enforcement agencies have actually reaped the benefits of research partnerships” (Sanders, 2009).   Other scholars describe these partnerships as filled with mutual misunderstanding that negatively impacts police-academic relationships and practices (Bradley and Nixon, 2009: “Ending the ‘dialogue of the deaf’: Evidence and policing policies“).

This research raises serious questions about the prospects for success of the proposed Academic Advisory Council, proposed by Judge Scheindlin.  This council is intended to engage in a “community-based remedial process to develop sustainable reforms to the stop-and-frisk practices of the NYPD.” Scheindlin recruited Brooklyn Law School Professor I. Bennett Capers to be chair of the council, along with a dozen law professors from Columbia, Yale, Fordham, City University of New York (CUNY), Rutgers and Hofstra law schools, all of whom will serve in a pro bono capacity.

Although this Academic Advisory Council will set to play a large role in informing and shaping further police reforms, it is worth noting that other police-academic efforts at reform are underway.  One important new initiative is The Center for PolicingEquity.org, which seeks to promote police transparency and accountability by facilitating innovative research collaborations between law enforcement agencies and social scientists.

The Vera Institute report, Coming of Age with Stop and Frisk, by Fratello and Rengifo is a significant contribution to understanding the effects of stop-and-frisk policing, and there is much work to be done in documenting the effects of this practice, and in charting a new way forward.  The ruling by Judge Scheindlin makes it clear that the future of New York City is one without stop-and-frisk.  Academic researchers who are interested in this issue have a unique opportunity to help shape this future.