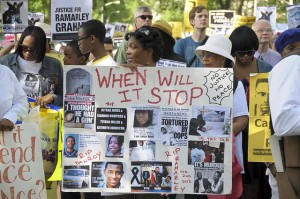 With this post, we are ending our month-long look at Stop-and-Frisk, the controversial set of policing practices that, as the New York Civil Liberties Union notes, has resulted in the discriminatory temporary detention of thousands of black and latino New Yorkers.

During our series, we have examined Stop-and-Frisk from a number of angles and perspectives, and through a number of different multimedia tools:

Of course, it’s that last post, which covers the election of Bill de Blasio and the recent ruling on Stop-and-Frisk legislation, that reminds us how quickly the conversation is shifting, sometimes in unexpected ways. Though our own series is over for now, we will continue to track Stop-and-Frisk on this site and will be putting together an archive of our Stop-and-Frisk posts and resources. We invite you to continue this important conversation in the comments section and through social media as we collectively chart the future of our city and work together to create a more just public.